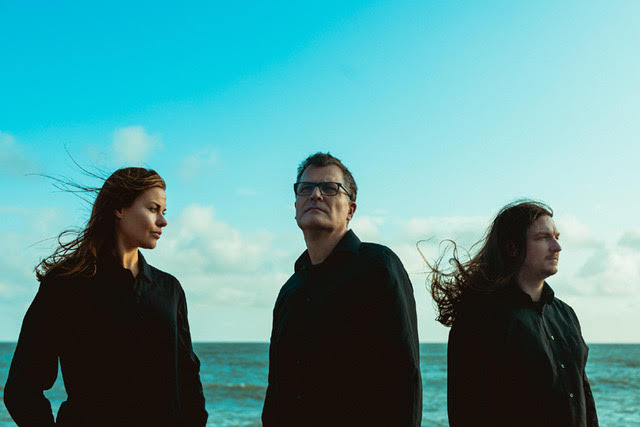 A real warmer for the soul, ‘In The Darkness’ is a track perfectly poised to stave off the specters of those encroaching long nights.

Taking us inside the emotional backstory that shaped the new single, Ian says: “The song is about those fleeting brief moments when you feel alive, aware and living. It was written, not wholly, but in part, in memory of my dear friend, Tim Cross (The Mike Oldfield Band, The Adverts, The Skids, Doll By Doll, Hall & Oates). Tim was a Producer and Composer and I worked with him for over 20 years on various music projects including albums for TV Smith, Dana Gillespie and on projects for TV and Radio. Tim passed away in 2012.”

‘In The Darkness’ is fittingly accompanied by a picturesque video that finds the band performing under a panoply of stars on a crisp autumn evening. Created with J R Lewis Films, the video was shot close-to-home upon the scenic Sussex Downs just beyond Brighton.

‘In The Darkness’ stands as the first single of a forthcoming new album arriving on 28th February 2020: ‘Double Rainbow’. As with the single, all 11 tracks of the upcoming long-player were engineered by Séadna McPhail, mastered by Alan Lowles at Airtight Studios, Manchester. Initial recordings were made at Simon Yapp’s studio, Subtown Studios, in Brighton a fact that owes itself to the origin of the band’s name: Ian Roland & The Subtown Set. Acclaimed producer Nigel Stonier (Thea Gilmore, The Waterboys, Joan Baez, Martha Wainwright, Fairport Convention) also offered his golden touch on a number of tracks set to feature on the release, following his commendable work on the band’s two previous EPs, ‘Day Became You’ (2017) and ‘The Valley’ (2018). Taking in sounds from soulful folk, to skiffle to rock’n’roll and folk-pop, the band’s keenly anticipated debut sees the band traverse a breadth of styles and genres with wide-eyed ambition. Underpinned by Ian’s eloquent and emotive lyricism, ‘Double Rainbow’ promises a beautiful and breathtaking release in waiting for the new year. Standby for further new music from the record in the coming weeks…

Ian Roland & The Subtown Set are songwriter and guitarist, Ian Roland, joined by Simon Yapp, on violin and Jade Woodhouse, on cello. They are a #FolkPop #SoulFolk group with a nod to the classical and an embrace of three-part harmonies.

Since 2015, when Ian and Simon started performing live as a duo, they have played 300+ gigs in and around Brighton, Bristol, Cambridge, London, Sussex, and Kent, supporting acts such as Martin Simpson, The Black Feathers, Stick In The Wheel, and TV Smith. In support of their upcoming debut album, Ian and the band will be taking ‘Double Rainbow’ out of the studio and to live venues across the nation in 2019 and into 2020.