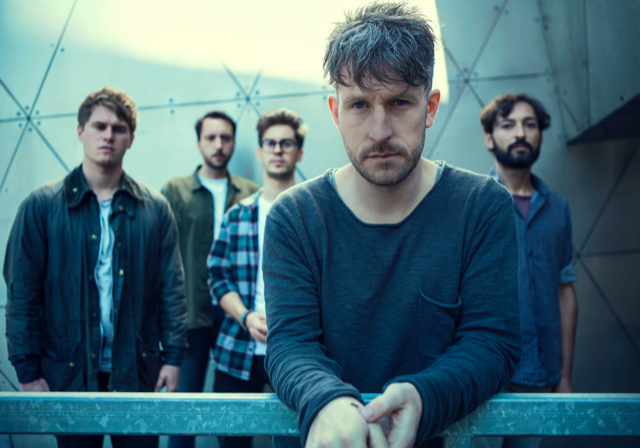 Irish London-based, soundscape collective, OFFICER, announce their new heartbreaker single, ‘Heavening (Watch Out Bottles)‘ from their forthcoming album NIGHT TENNIS, due out February 28, 2020. The album and its singles explore deeply personal experiences from the life of their writer and frontman, DC Logan. It is awake with emotional intelligence and spans Irish folk, singer-songwriter, alt-country, soundscape, and electro influences to create a signature indie sound. This song is a marker of an album where Logan has managed to create something very unique that can actually be called his own sound, which is a rare enough experience these days that it’s a little shocking to come across.

This is a truly unique and enchanting love song overflowing with the guts and glory of real experiences of deepest commitment that carries you on a stunning journey of hurt, loss, redemption and hope: What happens after first love, when life throws everything including the kitchen sink at you and you have to come of age, grow up, get your hands dirty, commit yourself to the triumph and turmoil of a relationship? What happens when love demonstrates to you that you need to examine your heart and head and take on the war of changing from the inside out? There’s a real struggle with your own self and demons in this gorgeously melodic, organic vs mechanic, soundscape song, that features mobile phone recordings of waterfalls, London Underground tube trains, distant conversations, automated tannoy announcements, studio fumbles, night shelter cooking noises and doorbells, and city snow blizzard winds.

“There is a feeling that permeates the whole sound and lyric of the song as though there’s an exhausted yet exhilarating mustering happening of the tiny little fragments of what you have left and the making of a firm decision to build whatever good you can out of the ruins you find yourself in and re-committing to your love when it would be much easier and much more appealing to throw in the towel and walk away clutching some deeply flawed false idea of your own individual freedom or benefit in something, someone, somewhere new. You can hear a sense of choosing to grow and change together. ‘Heavening…‘ is a song about love made out of the most bruised, tough and ultimately true and joyful stuff that transports you to a kind of heaven place via hell within the confessional throws of a very earthly relationship. We can only hope and pray this is a sure signal of what’s to come on this new February 2020 album from OFFICER.”

NIGHT TENNIS is the much-anticipated sophomore album from the critically-acclaimed songwriter, OFFICER. Logan and his collective won RCM Artist Of The Year among other blogosphere adulations following the release of his ‘immersive, widescreen, intelligent and moving, debut album, MYRIADS, and the ‘magical pin-drop live performances’ of his subsequent solo tours in 2016-19. So, in the nicest possible way – Get Lost! …in this gripping new offering from this gentleman of the North Coast due for release on Friday 28th February 2020.

MORE ABOUT FORTHCOMING ALBUM  NIGHT TENNIS:
The idea for, or maybe better-put, the unveiling of NIGHT TENNIS was the coming together of two things… first, it came from a place of Logan battling off severe anxious thoughts during long stretches of insomniac nights whilst intermittently watching old footage of Robert Rauschenberg’s performance artwork in 1966 called Open Score. The performance took place in a New York Armoury where viewers watched an indoor tennis match performed with rackets that were wire linked to both the lighting and sound within the auditorium. Each hit would trigger a sound through the speakers and also turn off one of the 36 lights until eventually the game was played in complete darkness. It was like watching a new ritual design in the fashion of an ancient Tenebrae liturgy by the end of which, all the candles have been extinguished. It simultaneously spoke to DC, both on a fun aesthetic level and on a much deeper emotional plain and helped him through.

Secondly,   NIGHT TENNIS is a nighttime album. At once there is a sense of both fighting darkness and playing within darkness, but ultimately fighting darkness through play. The album doesn’t just deal in abstract concepts though.

As DC explained to me “It confesses and processes the past few years of my life where I have become a father and have found myself both literally and psychologically vanishing from those I love most in a torrid struggle with and for my sense of wellbeing. But it tries to use this experience not just to return to reality as it is, but to construct a new reality, maybe even a new me I wish to be.”   NIGHT TENNIS is both the process and the record of that journey. Logan continues “Whilst the first LP, MYRIADS felt elementally like a kind of wading against heavy water album,   NIGHT TENNIS is very much a more air album and there is a skyward thrust towards an open crystal clear night sky running through it – that’s how I seem them in terms of imagery. The recurring catchphrase or hashtag that emerged for me, and eventually all of us who worked on the album was #heavening when we felt we were getting the drums or guitars or synth sounds of a song right for the album”