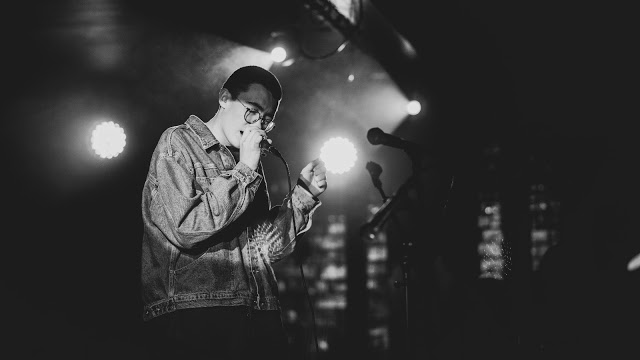 Ewyorican takes DIY to a new level. Raised in Dubai and living in London, Ewan Samms began producing futuristic Hip-Hop from his bedroom in 2017, at just 15 years old. A classically trained guitarist and queer voice, he takes from a swathe of influences, including Billie Eilish, Tyler, the Creator and Kendrick Lamar. In 2020, the 18-year-old Londoner has been noted for his modern DIY production, thoughtful bars and Gen-Z relatability, building a following on Instagram.

‘Treat Myself (better)’ and its visuals were created by ewyorican, like his previous single ‘After’ which received support from BBC Introducing and Balamii Radio, though this time in national lockdown. Utilising the internet to self-teach music and video production chops, his mission as an artist is to soundtrack the modern queer teenage experience. The effects of lockdown on education strike an emotional chord with much of Gen-Z.

We shared some questions with the rising producer and voice to get to know more about him and his plans for the future.

School of Rock, the Jack Black film, I think i was like 4 when I saw it and that shit changed me. To be honest, I’m like 90% ewyorican, 10% Dewey Finn, and that was the first time I realised like music doesn’t just happen, it’s made and can be by anyone. After that, 2010 pop music, like Black Eyed Peas, Bruno Mars, Circus era Britney, 9 year old me ate that up. I remember the first album that I really sought out was Pure Heroine by Lorde when I was 12, and that was definitely the start of me finding my own taste and seeking new releases.

What are some of your key musical influences?

Kendrick Lamar boggles my mind. I think he is the perfect artist, for real. I literally wrote a dissertation on TPAB and DAMN. If I could write a verse with even 10% of his wit, technicality and groove, I think I could die happy. Other than that, Tyler, the Creator, Solange, Frank Ocean, JPEGMAFIA. I just love how in control they are.

If you could paint a picture of your unique sound, what would it look like?

Probably some constantly changing blue image. Definitely blue. The fact blue is both calm and sadness really resonates with me. As long as I painted the picture, it should be accurate.

All my tracks have started at school as instrumentals. Making beats in before school and at lunch for like 3 years, then I usually take them home and figure out what they are. Lyrics usually come last for me.

What gets your creative juices flowing?

Other art. When I listen to new projects or albums I love, it just makes me wanna make my version of it. I take comfort from the idea that I can’t exactly recreate other works, cause I can try and write a fire Billie Eilish song, and then I just have a new-sounding ewyorican song. Music, movies, visuals, anything really, food as well.

As an artist, it becomes apparent that there is a huge difference between the art and the business. Is there anything about the music scene that you would personally change?

This is especially true as an independent artist. The industry is constantly dynamic, so it’s a double-edged sword, right? It’s super hard to get anywhere on your own, but at the same time, if I can get to a trend before the labels, then I’ve won, you know? I think there’s even more room for artists and audiences to get more direct with streaming.

Tell us about the chemistry you have with your fans on stage.

The last show I played at Peckham Levels in London was one of the best nights of my life. There was no stage. Just a mic and a crazy band behind me. It was the last time I could feel the volume and warmth from a mass of people just present in the moment. A lot of the people I’ve performed for are my age, and with this whole year, a lot of us are going through similar trauma, so that link is mad strong.

‘Hope’, a track I released last year for a friend who passed away in 2019, I kind of shut down when it came out and the fact that a song so personal resonated with other people in a time of grief was really visceral for me.

Success is being able to make what I wanna make, when I wanna make it, without having to worry about the bills.

What’s on your current playlist?

A lot of new pop, Dua Lipa, Rina Sawayama, Charli XCX. I think I gravitate to contrasting music to my current situation, and I’ve always found pop to be joyful. Don’t Start Now is a 10/10 perfect song, fight me.

Breakdown the news for us: what can we expect from you in the near future?

A lot of music from quarantine, July and August are going to be packed. Mixtape on the way!