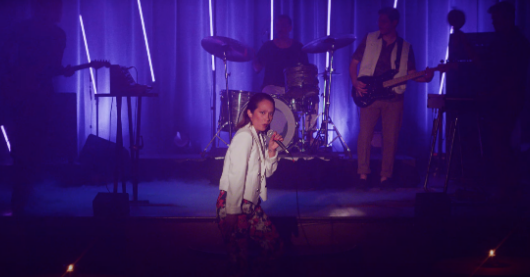 Hot off the back of the release of their album Concorde (11 September via Lisbon Lux Records), French disco synth-pop band Le Couleur will be sharing the video for their single, ‘Silenzio’ on the 24th of September.

Directed by the independent film director Ariel Poupart, the music video for ‘Silenzio’ has the beat picking up and flanged guitars take centre stage. ‘Silenzio’ is about death on the prowl, depicted as a betrayal in the mafia that ends with “il bacio della morte” (the kiss of death). Life and death is a powerful duality, but try as hard as we might, there’s no escaping the latter’s inexorable victory.

Director Ariel Poupart shares the concept behind the music video, “For Silenzio, we wanted to recreate the cabaret atmosphere of gangster films to match the song’s lyrics. We also went for the colour palettes and textures of Giallo films, that is to say the very saturated gore of Italian murder mystery films of the 70s.”

Currently based in Montreal, Canada, Le Couleur is led by Vietnamese-Canadian singer Laurence Giroux-Do and consists of Laurence, Patrick Gosselin (Bass, keyboard and guitar) and Steeven Chouinard (Drums and sequence programming). When finding inspiration for their sound that crosses the borders of synth-pop, nu-disco and French pop, Le Couleur turns to the likes of The Beatles, Bowie, Steroalab, Queen, Led Zeppelin and LCD Soundsystem. Their own remarkable sound draws closer parallels to the likes of Róisín Murphy, ABBA and Sébastien Tellier.

Le Couleur has received significant support across the globe, having been featured in publications such as The Fader, Noisey, All Music, Flaunt Mag, Brooklyn Vegan, Exclaim!, mxdwn, Atwood Magazine, Beats Per Minute, NOVU, CBC Music,  and Made In Shoreditch amongst many others. The band is currently sitting at over 10.9 million plays across streaming platforms with features on noteworthy Youtube channels i’m cyborg but that’s ok and David Dean Burkhart. Le Couleur has been nominated multiple times and won the GAMIQ prize for the ‘Best Electronic EP of the Year’ while their latest album (P.O.P) was selected among 40 Canadian albums on the Polaris Music Long List. The band has toured internationally multiple times, having performed at SXSW, FEQ, Osheaga and Liverpool Sound City.