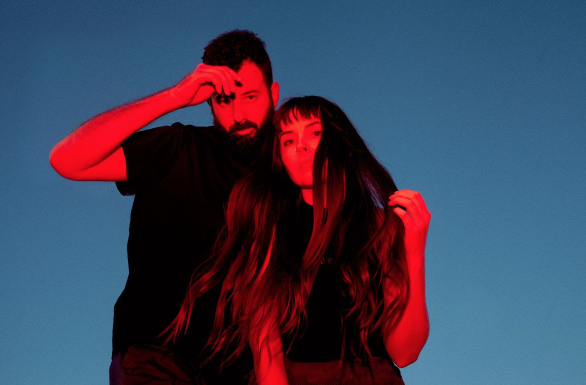 CLAVVS share their new song “Dance In Place” via Under the Radar. Infectious and radically joyous, the video features the electro-pop duo dancing across their neighborhood in Brooklyn, ultimately meeting up together to dance it out. “Dance In Place” is an exercise in unbridled happiness and self-acceptance, an upbeat anthem in the face of an often joyless culture.

Amber Renee and Graham Marsh have become fixated on one thing– finding joy in little moments. As CLAVVS, they’ve shifted their former goal of making subversive pop songs to one that simultaneously facilitates and reflects their own growth. And in doing so, they’ve embraced their flaws to reinvent themselves entirely.

“The question became, how do we make CLAVVS songs that we can dance to and smile to?” Amber says. “We really wanted to challenge ourselves to make something we had never made before, something that, for a long time, didn’t feel at home to us. We didn’t know how to write happy songs that felt genuine.”

But as it turns out, they grew from the challenge. With their new single “Dance in Place” CLAVVS have certainly found a home in the indie dance space. Featuring catchy horn melodies, Graham’s playful bongos, and Amber’s warm, layered vocals, “Dance in Place” feels joyous but not at all saccharine.

“‘Dance in Place’ is basically an invitation to choose joy in every moment. It’s a criticism of capitalism, of grind culture, of sacrifices I’ve made for a twisted idea of success. It’s a call for radical self acceptance and joy in an often joyless culture,” offers Amber. “I wrote this song in February, so it was super weird when we were all kind of forced to closely examine those things in March. We couldn’t have guessed how on-the-nose this song would feel now.”

The accompanying video (which the duo made themselves on an iPhone) features Amber and Graham dancing through their neighborhood in Bushwick and Ridgewood. “For the past few years I’ve been imagining visuals that capture my experience of moving through New York but with this fantastical element of suddenly connecting with strangers in some unexplainable moment of celebration,” Amber explains. “And especially now, having lived through Covid here, we both feel even more bound to this city and our neighbors. So this video is a socially-distant version of that daydream.”

“We aren’t taking ourselves very seriously anymore,” says Graham. “We just want to have fun with our band.”

“Once, I wanted to write songs that could change the world around me,” adds Amber. “But now I look back and laugh at myself. I want to write songs that change me, that transmute my trauma and my joy into something tangible. And this song is that. It’s a present tense reminder for me to quit the race and dance.”