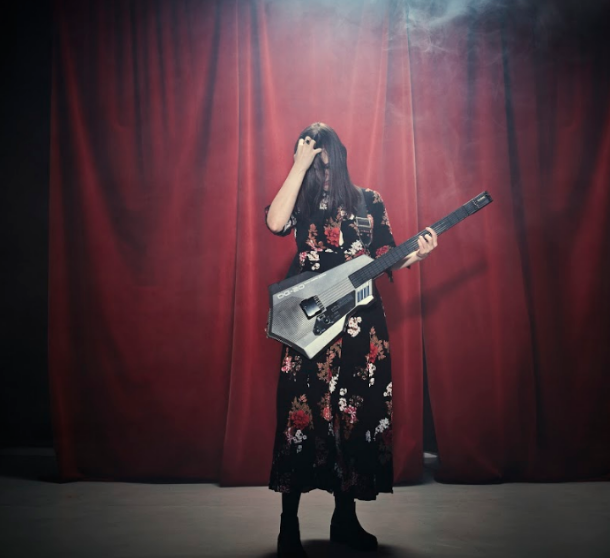 Having established herself as one of Sweden’s most esoteric and mesmerising songwriters, with critical acclaim from Uncut, Mojo, Clash and Pitchfork, and shows with the likes of Chelsea Wolfe, Mark Kozelek and Jens Lekman in recent years, Promise and the Monster (aka Billie Lindahl) has now returned to deliver her latest sweeping single ‘Closed My Eyes’, lifted from her forthcoming new EP ‘Chewing Gum’.

Capturing more of that dark yet enticing sound that she is known for, ‘Closed My Eyes’ makes for an incredibly rich and inviting return. As her debut single through new label Icons Creating Evil Art, the new offering sees her re-emerge in a whole new light, channelling a smooth and lofty aesthetic that sets her uniquely powerful front and centre.

Speaking about the new single, Billie said, “I wrote ‘Closed My Eyes’ surprisingly quickly after thinking about the ambiguity in that image, closing one’s eyes for various reasons. It was good fuel. The women in this song are out roaming in the streets. Marilyn is famous and Kimberly and Brenda got killed by Ted Bundy. The song was pretty easy to record compared to the other songs – it was a Paranoid moment so to speak. You know when Black Sabbath recorded their album Paranoid they just needed an extra song and came up with that riff, and bam: history. It worked just that same way with this song.”

Billie’s musical education started young, playing Swedish folk on the cello at school by day and recording mix tapes by night. She became fascinated with Nick Drake, Kaki King and Elliot Smith, writing her debut EP ‘Antarktis’ and first album ‘Transparent Knives’ at the age of 18, having been picked up by Imperial Recordings. With a father playing country bands and mother into an eclectic mix of jazz and alternative rock, from day one her tastes were always going to be fluid.

By second album ‘Red Time’ in 2009, Promise and the Monster were touring Europe with, among others, label mate José Gonzales. Having relocated from the pine forests of rural Sweden, Billie embedded herself in Stockholm’s underground music, literature and art scenes. Collaborations followed, with experimental bands such as Alcest and This Gift is a Curse along with performances on heavyweight festival bills such as Roadburn.

Signing to Bella Union for her third full-length she released ‘Feed The Fire’ in 2016, produced by Love Martinsen, a quintessential break-up record that focused on abstract imagery.

In 2020, Martinsen joined Billie to co-write her upcoming material. The new songs explore a less introspective side of her psyche, with an emphasis on the tongue-in-cheek nature lurking beneath a veneer of earnestness.

On the signing news, Billie tells us, “I’m so pleased, together we can take this in a great new direction. I used to like writing quite cryptic stuff but I tried hard this time to get out of that safe haven and be more direct. The new songs often express the feeling of being that last person at the party, dancing slowly in the background, waiting for something to happen. Like a sad moonlight disco.”

While the label Icons Creating Evil Art added, “We are thrilled to welcome one of the most iconic voices in dark pop to our evil art family. Promise and the Monster has been working right beneath the surface and in the shadows creating the most beautiful world of her own. It’s time we invite you all to share it with us! “