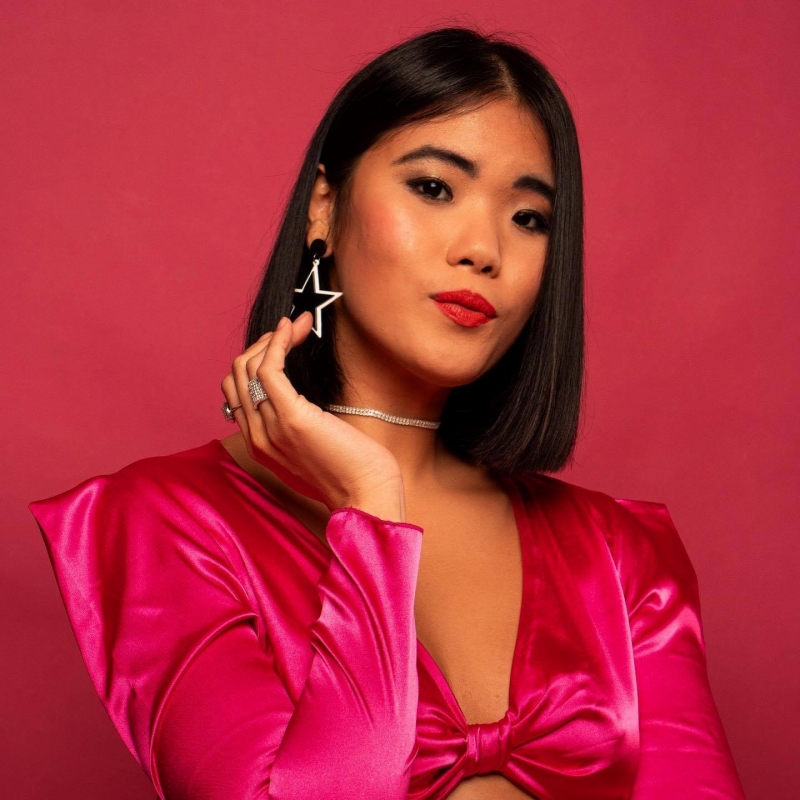 Singer-songwriter Jessmo is a classically trained musician that is taking a shot on the dance-pop scene and sound, and thriving while doing so. Earlier this year, the songstress released her EP Dance It All Out, which sounds like a call to the dancefloor of your soul. Instead of dwelling on the negative internally, she channels her emotions in these epic dance songs.

We spoke with the songwriter just after the release of the EP in this exclusive with her.

From the beginning of my existence, I guess? Haha. I’ve been classically trained since I was 5 and I’ve always gravitated towards all things music from the very beginning, from joining the school band, club orchestras, and dance clubs. I love the performing arts and nothing feels better than presenting your best self on a stage with an audience to watch a piece of an art form that’s to be experienced wholly in person.

Music production came a bit later right after I dropped out of college early to pursue a career full-time as a musical artist. I had some experience working with session producers at the beginning but the pieces were never something I’m entirely proud of nor felt really connected to. That’s when I decided to pick up music production for myself as I think that’s the best way that I can translate what’s exactly in my head directly into a piece of music. There is just so much you can explain and describe in music whereas most of the time, what you have in your head just simply can’t be easily translated into words.

And as a producer yourself, you’re able to experiment and take all the time you need to perfect that piece of music. I love the whole experience and the process itself makes me feel very alive, to be doing something that I’m so passionate about. Creating and writing music can be very abstract too, in the sense that you’re creating something out of nothing. But that’s what makes it amazing, isn’t it?

Please tell us more about how your latest song/release/project was conceived.

Well, my debut EP, Dance It All Out is one of the first full body of work I’ve put out that’s entirely done by me, from production to music arrangement and songwriting. I wanted to set myself in a direction that speaks volumes of me as an individual as well as an artist.

My songwriting style has always been inclined towards a heavily emotional and impetuous theme. But I didn’t want to be perceived as a whimpering and vulnerable damsel in distress crying about heartbreaks.

Instead, I wanted the attitude in the songs to be strong and uplifting, something that’s fit for a stadium or arena show, despite the sensitive lines in them. Everyone can relate well to heartbreak but why shouldn’t we celebrate them? They make us the person we are today. I love that idea. Just because it’s a song is emotional doesn’t mean that you can’t dance your night away to them. Sometimes that helps. I wanted young girls to be inspired and stand up for themselves, have the upper hand in situations, especially if it revolves around personal relationships.

I had the structures of all 4 songs ready before I set foot in LA to finish up the vocal recordings. However, it took me quite a while to release them as I kept wanting to wait for the “right time” but eventually realized that there isn’t one. I just had to put myself out there right away and move forward with the next project in line.

All of my work is very much written “in the moment” on the least expected day when feelings are heavily involved and when I’m on a roller coaster of emotions. That’s when it’s effortless for me to write a song, as I translate and channel all that energy in front of a piano. I have never once written a song feeling neutral if that makes sense. That is why there seems to be a common emotional and blunt theme to them. I love it that I can be completely transparent and put these feelings into good use.

Once the full structure of the song (which is the most important part for me) is completed on the piano, I take them to my studio and form a fitting production for it. And of course the vocal tracking and the final mastering touch to finish the song. The beauty with this process is that I can also easily do a performance of the same song stripped and it still sounds like it belongs. The piano is my favourite instrument and considering that I was classically trained, it’s still the easiest and most comfortable choice of instrument for me to write with.

Of course, there are exceptions to the songwriting process, especially if a song I had in mind were beats or house/dance-pop tunes to begin with. There is no one formula, every song is different.

And yes I love writing about love. I believe it’s the best and strongest thing in the world.

How much do you invest in how your music is received upon release? Are you very concerned about how your art is received?

Very little, to be honest. I just feel like I don’t want to be obsessed with numbers and constantly looking out for the response with my music releases. It’s just not the healthiest. The same for all things social media today.

I put in the work and made a piece of art that I’m really proud of, I put it out there to share with the world and do some proper marketing and PR work within my reach. I’m really happy and grateful when people reach out, but otherwise, I just let the music flow organically to wherever it wants to be.

Instead, I prefer to move forward and channel all that energy into the next project or new music that I’m working on.

Haha, this might sound really silly but, I think the most memorable response I’ve had to my music was actually a private moment with my boyfriend. We were dancing around the bedroom and jumping on the bed in the evening when my EP release went live.

Hahaha I know it sounds really mad and stupid, but the best things in life are really simple.

Are there any key non-musical influences on your sound and creative process?

I guess most of us get inspiration from people that are close around us. There are always stories behind every relationship and you get your ideas from human behaviours and interactions everywhere.

Lately, I’ve also been getting a fair bit of inspiration and joy from playing computer games; World of Warcraft to be specific. Don’t ask me why or how haha but they do have some incredible soundtracks if you actually pay attention to them. It’s a great way to let your hair down after a long day of work, to play with your friends, and let loose in that role-playing world. It’s sort of similar to songwriting, isn’t it? Everything is pretty much a fantasy and you’re creating or building something out of nothing. I love it.

In these strange times due to the covid-19 pandemic where working from home is the new norm, I don’t really feel like I’m missing out in life as I’m still having lots of fun indoors and getting my creative juice flow in other ways. Haha.

Do you have any information regarding upcoming releases, projects, DJ mixes or collaborations in the pipeline that you would like to tell us about?

Well, a full-fledged debut album with a bit of variation of my sound is on the way within the next half year. I want it to be really good so it’s gonna take some time in the pipeline. But I promise you it’s gonna be worth it!

If you’re not having fun doing it, then you’re doing it wrong. Work hard and don’t be afraid to be yourself, it’s more than okay to be different.