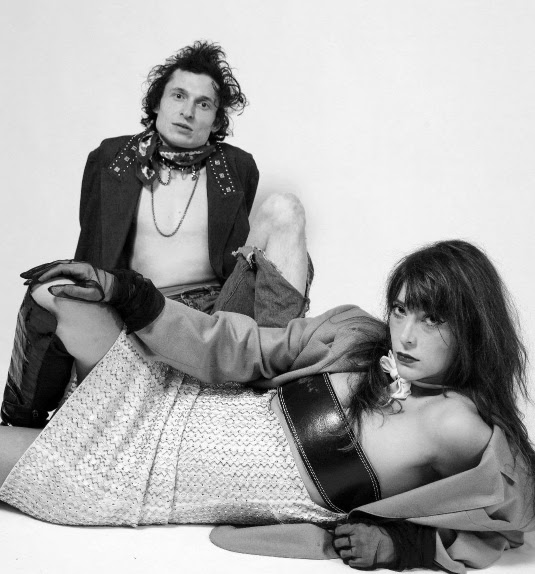 Montreal-based Paupière shared their album Sade Sati, which features a track of the same name. Brooklyn Vegan premiered the track, praising it as a “gleaming, anthemic title track that owes a little to Tubeway Army but feels very modern at the same time.”

Now led by Julia Daigle (visual artist) and Pierre-Luc Bégin (Polipe, We Are Wolves), Paupière is a glamorous and flamboyant Montreal duo with an underground sensuality that creates pop music that is both naïve and profound.

In “Paupière”, there is “peau” (skin) and “pierre” (stone), the organic and the mineral, sensitivity and hardness.  Paupière, with its raw words and uncompromising melodies, confirms with its new album, Sade Sati, its desire for authentic expression. In “Paupière”, there is also the word “pop” as in Pop music.  Their writing services the melody, offering us songs filled with these catchy little phrases that turn and turn in our heads until they’re fully anchored in our memories.

Mixing English synth-pop and French songs, Paupière is a “neo-romantic” band. If one can hear echoes of Human League, Deux or Depeche Mode, their intertwined voices sing of the adolescent and hedonistic romanticism of the 80’s as much as contemporary disenchantment.

As in Xavier Dolan‘s films, they share a vision of destinies torn between ultra-romanticism and despair.  After two EPs (Jeunes Instants and Jettatura) and an album (À jamais privé de réponses) released on Lisbon Lux Records , Paupière is back with a second album Sade Sati.

According Indian astrology “Sade Sati” represents the result of our past karma. A challenging period that is also full of accomplishments. According to the legend, the phenomenon would manifest itself every 7 years.

It’s an inevitable, but agonizing, period for those who want to fulfill their true destiny, in other words the “30 year’s old life crisis”, which marks the end of naivety. It rules our inner clock in a deep, slow, but sensitive way. It’s cycles are known for bringing forward major turning points in our lives.

Paupière invites us here on an astral journey to visit dark places pierced by light like luminous cracks and where adventures are populated with inner ghosts that come from far away. In this story Pierre-Luc and Julia represent fictional characters, twins who are lost in a futuristic world, the lone survivors of a planet after chaos. Sade Sati is a metaphor or the entry into adulthood with its share of worries and the feeling of freedom and rebirth that comes with it. The album is divided into three parts : Chaos, Flight and Liberation, which summarize the creative and personal past of the band.

With the support of producer Vincent Levesque (We Are Wolves), who has been with Paupière since their beginnings, they have integrated organic instrumentation that enriches the electronic compositions of the album while keeping their sound signature intact.

Paupière is known for its lively and explosive stage performances. The duo exudes a magnetic sensuality, their sound evolves between pop structures and electronic pulsations and produces haunting, even languorous rhythms.